The Last Straw by Ed Duncan 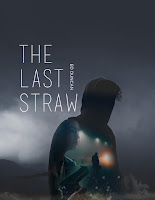 
When a teenage girl witnesses a carjacking went bad, she is marked for death by a crime boss. A lawyer and an enforcer forge an uneasy alliance to protect the girl from a hitman with an agenda of his own. Soon after, Paul Elliott - lawyer and close friend of the witness's family - begins counseling them and becomes entangled in the murder plot. As the long-simmering feud between Rico - the white enforcer - and the hitman John D'Angelo reaches boiling point, bodies start to pile up in rapid succession... and old scores will be settled.

Sometimes you need to find your self a good honest to goodness crime novel. This is not a whodunnit or killer on trial kind of book. This is the dark and murky world of anti-heroes and men who don't care that what they do is bad as long as they get there cut at the end of the day. What Duncan does is bring us to the other side of Chicago, the one the tourist brochures won't tell you about for fear it would scare you away.   And a man who may kill for a living but still has managed to keep a small part of his soul intact. He has a code that rings true for him and while it may have a little wiggle room there are some lines he just won't cross. Think of him as a mix between Leon and ghost dog (Films of the same name ). And for all, he does in this life he has respect for someone on the other side of the line Paul Elliott.

These two work as the odd couple of Duncan's world, while everything would suggest that these two should hate each other with every fiber of there body's, there is some deep knowledge that they share. That more often than not the world is not a fair place, but does that mean you have to step off the line and find a better way to deal with the problems of the world. This is where things get a little murky for at least one of our heroes. But what is to be done when an innocent girl gets caught up in something she can not comprehend. I really enjoyed the dynamic of these characters they are unabashedly a little larger than life in a story that plays well into its genre. coming into this series after it has already started made me wonder whether I would miss valuable insight into them but before I knew it I had a enough of an understanding of them to shed any doubts I might have had.

As for the story It rips along like a .45 bullet rushing past your head, The action keeps on mounting as our heroes try and find a way out for Sandra and themselves before they end up six feet under. These guys crash a path through Chicago's underworld in a way I found refreshingly honest. With the writing of this book, the author knew exactly what he was aiming for. It's a crime novel in a style you don't seem to see too often at the moment. With good versus evil and just about every smeared shade in between. While there are a few twist and turns along the way this is a juggernaut of a story that just won't quit. As you would expect there is a fair amount of violence along the way but even as the blood splashes up the walls it never felt to me to be gratuitous. In the world of these people all their actions flow smoothly and at no point did I think it fell out of place.

For me this book ended up being a fun and enjoyable ride,  It's a book that allows you to slip away into its world and have a blockbuster experience between the pages. I'm sure I shall delve into the first installment, and look forward to where the author takes his characters next.

I want to thank Book Publicity services for the chance to read this book in exchange for my honest review.
Monkey review at 17:10
Share